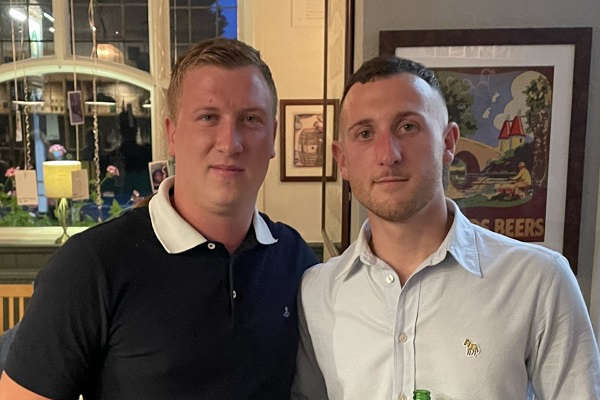 The future of a historic inn has been secured thanks to the intervention of brothers Ben Standen and Harry Dumville.

The businessmen have stepped in to ensure the pub in Emsworth remains open and their intention is to see its fortunes flourish with investment in all areas of the High Street venue.

A pub has stood on the site since 1718 -- it was rebuilt in, 1800, 1865 and again in 20th century – and when Ben and Harry heard that its future could be in doubt they decided to approach Fuller's with a view to taking over.

A deal was done and now the brothers – from nearby Bognor Regis -- are busy readying the pub to open the doors on Wednesday (September 29) with a view to embracing the community and rejuvenation as the key driver.

Harry explains: "Emsworth is such a lovely place and the locals we have met have been thrilled that we got involved. We have community spirit as a really important factor in what we are doing. An area such as Emsworth deserves to have a vibrant pub in the heart of the community and that is our goal.

"We have a clear idea of just how we can make the Ship a community hub as much as a pub and long-term we have some exciting plans to ensure that as a business it holds its own in the High Street."

Ben says that seeing the pub industry hit hard by the pandemic -- around 30 pubs are closing every week in England, says the British Pub Association -- has been shattering but that the potential of growing the business has added to the pair's resolve to see the venue prosper.

He added: "I think we've lost something like 12,000 venues throughout the country in the past two years and obviously the pandemic caused by Covid-19 had a massive impact on the industry. For us to be able to try to make sure that one historic pub at least will be able to open its doors again is fantastic.

"We very much look forward to welcoming as many locals and visitors to the town as possible when we are pulling points again on Wednesday and our kitchen is open if folk fancy a bit to eat, too."