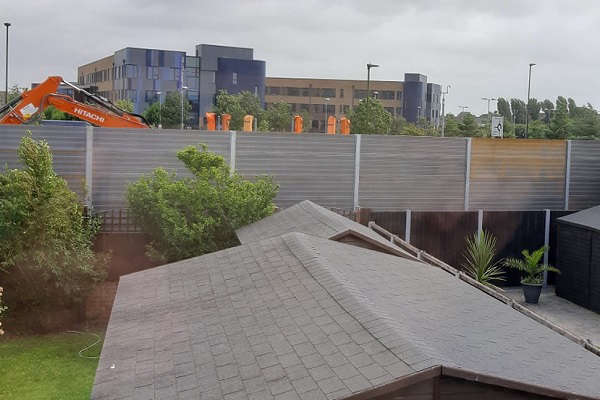 Littlehampton residents who have had a 3.5 metre fence built, in some cases, directly behind their garden fences, have supported reducing its height.

Residents of Highdown Drive and Amberley Close were asked by Arun District Council if they wanted the fence reduced following concerns that it is ‘ugly’ and ‘intrusive’.

The acoustic barrier was installed last year and commissioned by developer Persimmon to mitigate noise from the Fitzalan Link Road.

When planning permission was given for the road back in 2012, this was conditional on the barrier being put up.

But residents were unhappy with the final design – 3.5 metres tall and constructed from weathered steel – and dubbed the fence the ‘Great Wall of Littlehampton’.

ADC commissioned a further report on the fence which found errors in the original noise assessment. The latest assessment concluded that a 2.5 metre high barrier would mitigate noise to an ‘acceptable level’, with only a few decibels difference.

At a meeting in December, councillors agreed to consult residents on the way forward and agreed that reducing the height was an option.
Since then, 120 surveys have been posted to properties on the eastern side of Highdown Drive and Amberley Close, between the A259 and the school roundabout.

A freedom of information request shows that there were 62 responses. Though the 62 residents were not all in agreement over what to do with the wall, the majority (38) supported reducing the height ‘regardless of greater disturbance from traffic noise’.

A shorter barrier was supported by a further 12 residents but only if there is ‘likely to be no greater impact from traffic noise’.

But 12 did not want to see changes to the barrier, agreeing that it is ‘effective at reducing traffic noise’.

It is thought councillors will discuss the survey results and the council’s plan of action later this month.

A previous statement from Persimmon reads: “The acoustic fence has been delivered in accordance with the specifications set out in the planning requirements. If any changes are proposed it will be up to the relevant local authorities to set out their intentions.

Legal advice given to ADC suggests it may need to indemnify highways authority West Sussex County Council against damages if the wall is reduced in height, to protect against future noise complaints.

The council may also have to pay for any amendments to the fence.

One resident, whose garden backs directly onto the acoustic barrier, previously said moving the fence or changing the material would be ‘absolute folly’ and said residents would accept reducing the height by one metre instead.

“We are naturally delighted to have this much-needed review of the acoustic barrier and the vindication that the installation is inappropriate and over-engineered for such a minor road,” she said. “Moving the fence or changing the material would be absolute folly, incredibly expensive, and an entirely inappropriate waste of more public money. The route forward here is a sensible reduction in height.”